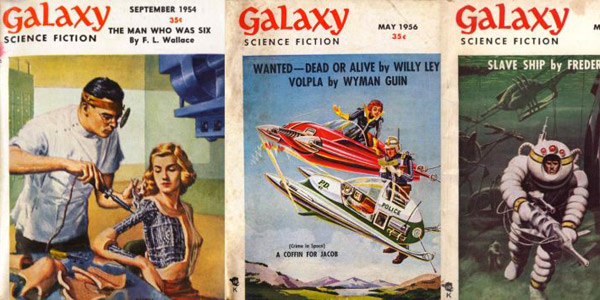 This has to be the coolest thing I have found in a while. The entire collection of Science Fiction Galaxy Magazines are available on-line for free. So you have no excuse to catch up on all of your vintage sci-fi on your commute.


Galaxy Science Fiction was an American digest-size science fiction magazine, published from 1950 to 1980. It was founded by an Italian company, World Editions, which was looking to break in to the American market. World Editions hired as editor H. L. Gold, who rapidly made Galaxy the leading science fiction (sf) magazine of its time, focusing on stories about social issues rather than technology.

Gold published many notable stories during his tenure, including Ray Bradbury's "The Fireman", later expanded as Fahrenheit 451; Robert A. Heinlein's The Puppet Masters; and Alfred Bester's The Demolished Man. In 1952, the magazine was acquired by Robert Guinn, its printer. By the late 1950s, Frederik Pohl was helping Gold with most aspects of the magazine's production. When Gold's health worsened, Pohl took over as editor, starting officially at the end of 1961, though he had been doing the majority of the production work for some time. 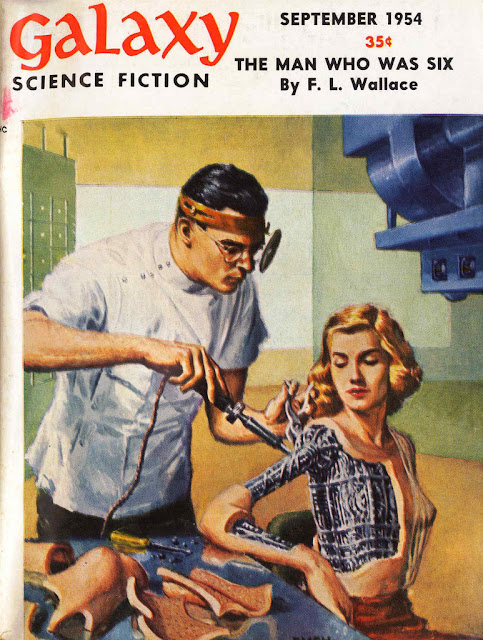 Under Pohl Galaxy had continued success, regularly publishing fiction by major writers such as Cordwainer Smith, Jack Vance, Harlan Ellison, and Robert Silverberg. However, Pohl never won the annual Hugo Award for his stewardship of Galaxy, winning three Hugos instead for its sister magazine, If. In 1969 Guinn sold Galaxy to Universal Publishing and Distribution Corporation (UPD) and Pohl resigned, to be replaced by Ejler Jakobsson. Under Jakobsson the magazine declined in quality. It recovered under James Baen, who took over in mid-1974, but when he left at the end of 1977 the deterioration resumed, and there were financial problems—writers were not paid on time and the schedule became erratic. By the end of the 1970s the gaps between issues were lengthening, and the title was finally sold to Vincent McCaffrey, who brought out just one issue in 1980. A brief revival as a semi-professional magazine followed in 1994, edited by H. L. Gold's son, E. J. Gold; this lasted for eight bimonthly issues. 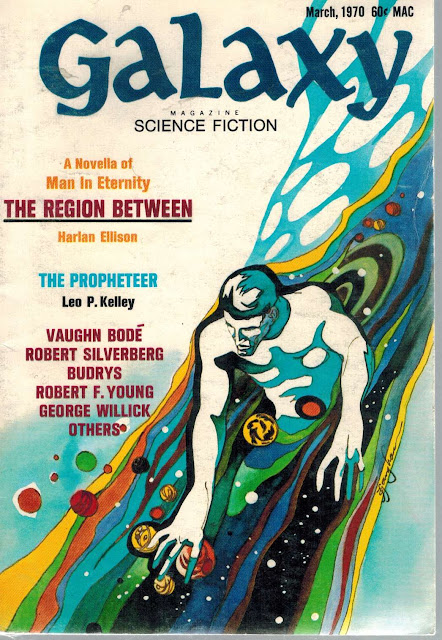 At its peak, Galaxy greatly influenced in the science fiction field. It was regarded as one of the leading sf magazines almost from the start, and its influence did not wane until Pohl's departure in 1969. Gold brought a "sophisticated intellectual subtlety" to magazine science fiction according to Pohl, who added that "after Galaxy it was impossible to go on being naive."[1] SF historian David Kyle agrees, commenting that "of all the editors in and out of the post-war scene, the most influential beyond any doubt was H. L. Gold".[2] Kyle suggests that the new direction Gold set "inevitably" led to the experimental New Wave, the defining science fiction literary movement of the 1960s.

Enjoy the read. Click here for the entire collection Free.